You're now at: 7 Abel Tasmanstraat

This street owes its name to Abel Tasman (1603-1659), a sailor employed by the VOC on various expeditions to the East Indies. He is most well-known for 'discovering' what is now known as New Zealand, as well as nearby islands. In 1642 he led two ships, the Heemskerk and the Zeehaen , on an expedition to the uncharted 'South Land.' During the expedition, Tasman's crew encountered indigenous peoples on three occasions: in present-day Tasmania, New Zealand and Tonga.

On 18 December 1642, Abel Tasman's crew encountered the Māori Ngati Tumatakokiri tribe on the shores of present-day Golden Bay on New Zealand's South Island. After exchanging trumpet blasts on the 18 th , this encounter ended in violence. On the morning of the 19 th , Māori waka [canoes] came out to meet Tasman's ships; four of Tasman's crew were killed. (1)

Tasman concluded that 'we could not hope to enter into any friendly relations with these people' and sailed on. The waka of the Ngati Tumatakokiri followed, to which Tasman's crew responded by firing at them with canons. According to Tasman's diary, one man was killed. (2) The area was subsequently named 'Moordenaers Bay' ('Murderers Bay') by Tasman and the violent encounter was recorded in detail on a map of the bay. (3)

Numerous accounts of this encounter have sought to understand and explain why it ended in violence, especially since the next recorded meeting of Māori tribes with Europeans (in 1770, Queen Charlotte Sound) proceeded peacefully. (4) Some scholars have looked at the importance of Māori beliefs in the use of trumpets to frighten away malicious spirits, seeing the encounter as a cultural misunderstanding. Others have looked at the history of the Ngati Tumatakokiri in the Golden Bay area, emphasising their vulnerability as a recently arrived tribe who potentially felt more pressure to defend their land in 1642. (5) Most recently, an anthropological approach has been used to examine the material evidence for the importance of defending kumara (sweet potato) fields under tapu (a ritually restricted state). ( These accounts have all contributed to a greater understanding of the possible causes behind the 1642 contact violence in contemporary Golden Bay. 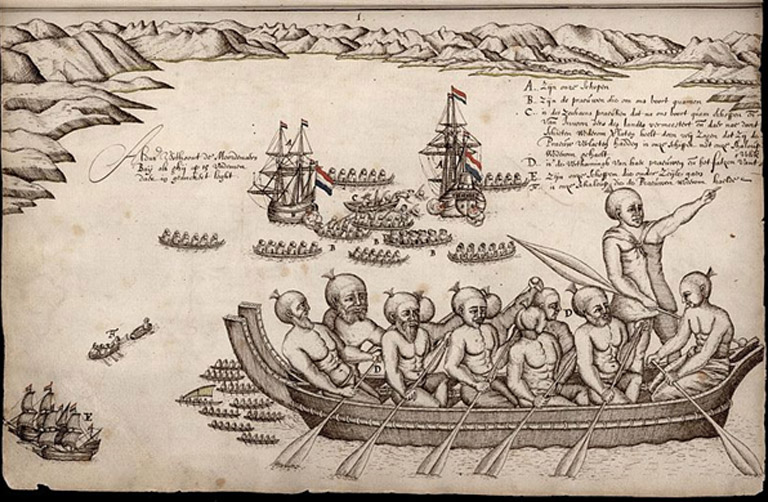 Opposite Kopi Susu, at the beginning of Abel Tasmanstraat, there is a wall with seven tile pictures. Unveiled in the spring of 2009, the tiles tell us about anti-colonial figures in the Dutch colonies. One tile depicts Douwes Dekkers (1820-1887), better known by his pseudonym, Multatuli, under which he wrote the iconic Max Havelaar (1859). It is generally understood that this book was an anti-colonial pamphlet, but scholars have recently emphasized how Dekkers did not oppose Dutch colonialism per se. Instead, the writer merely propagated a fairer Dutch colonial policy in his writing (4). His legacy as an anti-colonial voice is therefore not necessarily straightforward.

Another tile depicting an anti-colonial 'hero' is the one of Raden Adjeng Kartini (1879 - 1904). Kartini was a pioneer of women's rights, working tirelessly for universal education in the archipelago. She was married at the age of 12 and was unable to continue studying. During her marriage, she corresponded with friends in the Netherlands about the status of women and the importance of education, and her letters were first published for a Dutch audience in 1911.

Kartini is still the symbol of colonial resistance in Indonesia and in particular for women's emancipation. Her birthday, 21 April, is celebrated in Indonesia as the national day of the woman. 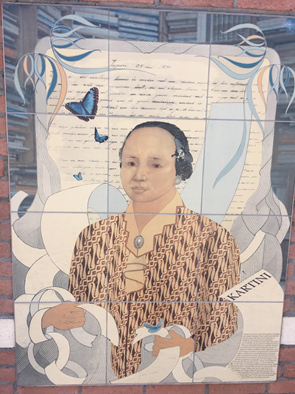 The tile tableaux was made by a group of about 30 residents and two designers from the neighbourhood, Kee Lengkeek and Marij Nielen. These tableaux are part of the project Slinger voor Lombok , which works with resident to decorate Lombok and its surroundings. For example, they have created a temporary neighbourhood garden and have made wall art with artists and residents.

Continue again along Kanaalstraat. After 100 meters turn right onto Pieter Bothstraat. Follow this towards Van Imhoffstraat.
Go to the next spot
The tour covers 12 points in the Lombok neighbourhood. It begins at Molen de Ster. Click on the map for more information about this point...
1