One of the characteristics of the Lombok district is the sense of community between its residents, and this is also clearly seen on the Ceramstraat. Lombok was initially known as an industrial district, but became a residential area after the 1980s. In many Dutch cities, streets in a district are named according to a theme and for Lombok, this theme was the East Indies. Initially, the street was called Boeroestraat. Boeroe (Buru today) is an Indonesian Island where the Indonesian president, Suharto, held political prisoners during the 1960s. Various groups of Utrecht residents and left-wings parties criticised this choice of name, and in June 1982, Boeroestraat became Ceramstraat (1). Ceram refers to an island near the Moluccas.

Several groups that spurred criticism of Boeroestraat united in 1983 and became Straatnamengroep Utrecht West (Street Name-Group West Utrecht). In 1983, the group published a brochure criticising the colonial street names in Utrecht, arguing that the municipality were ignoring the wishes of residents (2). This was one of the first organised criticisms of Lombok's street names. The activist group also created a questionnaire that was distributed in J.P. Coenstraat to foster awareness in Lombok. The street names were not changed, but the group organised a street party on the corner of Floresstraat and the current Ceramstraat. 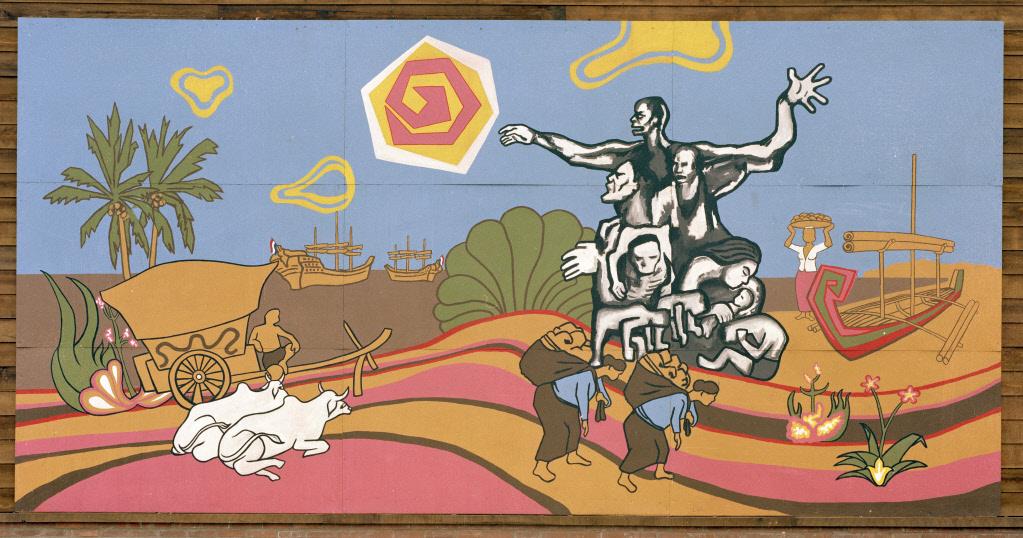 
Here, a mural was unveiled by the Indonesian artist and political refugee Basuki Resobowo. Resobowo had run for election back in Indonesia to represent the Indonesian Communist Party (PKI), but due to the anti-communist Suharto regime, he ended up in a refugee camp in China. Seven years 6 later he managed to reach the Netherlands via Germany. On 5 May 1983, Resobowo unveiled the mural.

The artwork was displayed on wooden panels on the side of a house but disappeared after four years and is still missing to this day. It was a clear example, however, of activists and residents criticizing the colonial legacy of Lombok.

The next stop is Van Heutszstraat. Walk up Lombokstraat and turn left at Kanaalstraat (the main shopping street). Walk along there for 100 meters and turn right at Bantamstraat. Walkthrough Bantamstraat towards Van Heutszstraat. At the end of the street on the right side you will see a garage door bearing the logo of De Grauwe Eeuw.
Go to the next spot
The tour covers 12 points in the Lombok neighbourhood. It begins at Molen de Ster. Click on the map for more information about this point...
1